For patch generation and LUT testing the Fuji IS-mini is hard to beat for sub-£1k. LightSpace will drive it for profiling monitors and since it has both HD/SDi and HDMI outputs it is very useful all the way to 1080 lines at 60P. 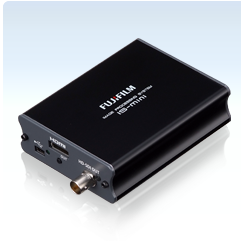 The software that comes with it is kinda utilitarian but can speak to multiple IS-minis over either USB or ethernet. So you can load LUTs to several units from a single computer and it will even listen to the commands from a Tangent Wave control panel and you have a very canny little grading system (all be with no memory!) - but for live colour correction it is used everywhere from HDR cameras feeding BT.1886 productions to folks who need to correct for unusual cameras in an otherwise standard OB environment. 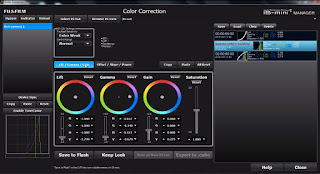 Having said all that it isn't a patch (pardon!) on LightSpace but they have just released an unlocked beta that feature colour space conversion LUTs which might be of interest to general colour-tinkerers.

The rapid adoption of 4K Rec2020 and the development of HDR has necessitated an increased need for colour space conversions, such as color gamut, various LOG curves and numerous other standards. As requests for products to handle this have increased, FUJIFILM has begun to develop a system for IS-mini users that will allow greater flexibility with colour spaces.


And the obligatory bullet points;

Grab it here.
Posted by Phil Crawley at 16:31 No comments:

Memories of 1999 at Resolution Soho

I'm working the weekend in a building that has been a TV facility for the last couple of decades. I had the privilege of being Chief Engineer here during 1998-2003 when it was the Soho branch of the Resolution Post Group.
Having opened a few cable-risers it looks like this place is largely the same (aside from the decoration) and in many of the rooms there is still equipment I either purchased or had the pleasure of fixing or calibrating. 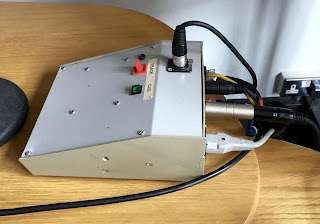 Custom talkback box; this is a little thing I home-brewed around 2000 - it's just a talkback box with a cue-light button on it. Still in use though! 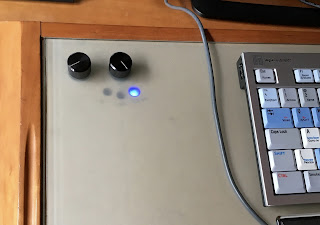 This wooden-surround for the Wacom tablet for a Softimage DS workstation had an little audio switcher built into it (selects between DS, VTR return and CD). The grahics tablet was originally hidden inside the polycarbonate sheet so you couldn't see it. 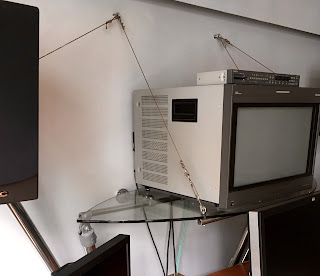 This monitor shelf was a bit of a mission; galvanised scaffolding poles are held in a triangle shape by chandler's wire & connectors. The tear-shape glass shelf sits on top of that (the ends of the poles have rubber caps) and the monitor's weight stresses the structure to keep it solid. I thought it would collapse in a week but here it is a decade-and-a-half later!
Also notice the PMC TB1 loudspeakers; most of the rooms here still have them. They were all purchased between 1999 and 2001 and are all still sounding good. 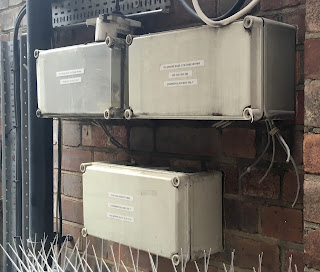 Back in 1999 there were no WiFi walkabout 'phones or office-grade DECT handsets. So - I bought the best domestic ones I could find and then spent a few days seeing where the best place was for the base-stations for maximise coverage for the runners, engineers and tape-ops (we still had those!). It turned out to be an external wall at the rear of the building. They're still there! (Although no longer used). 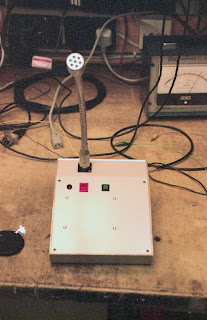 My good pal Malcolm Baldwin reminded me that he'd made the talkback box - he commented that he'd never really liked it but I thought it was splendid. Just shows that some engineers have higher standards than other...!
Posted by Phil Crawley at 16:15 No comments:

Next week I'll be representing at the HPA Tech Retreat; I even made it to the "featured" list!

From the Root6 blog;

In a session titled ‘Fibre/CWDM Infrastructure for Live and Remote Rec. 2020 and HDR Applications,’ Phil will argue that we now have enabling and affordable technology with CWDM to deliver high quality images without resorting to IP. “With the (some would say unseemly) rush to IP and Rec.2022, are we in danger of losing the very things that make broadcast video production so good – namely low-latency and uncompressed pictures? With a four-fold increase in data rates brought by UHD/4K and the last five years having seen commoditisation of CWDM, – we now have an enabling technology for quality in the face of the IT department!” 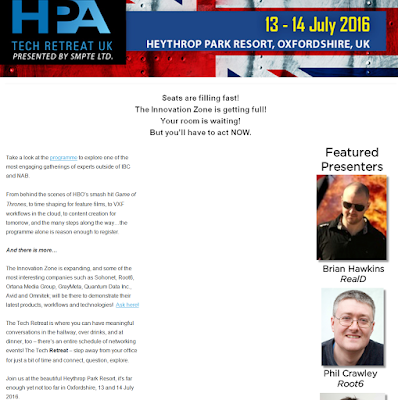 Posted by Phil Crawley at 08:56 No comments: