You can't deny the value in BMD SmartVideo Hubs - they are a fraction of the price of traditional broadcast video matrices. They have appalling return-loss on the BNC inputs and their control system is very simple (although in lots of cases that's a benefit). The temptation is to stick them in desks in edit, grading and audio suites, but they are noisy! The reasons are; 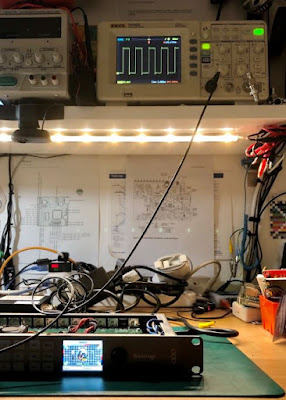 'scope is showing the tach o/p of one of the fans, yes, I was routing video!


Even though the cheap/noisy fans BMD fit have a tach output it clearly isn't read by the hardware as the fans run at full tilt from power-on. This one had been on and routing video for a couple of hours (with the lid on) and it's like sitting next to a vacuum cleaner.
So, quick look at RS and filtering by size, volts and then listing by highest air volume & lowest noise I got these Papst fans - they also have a tach output (I had no plan to use that) and more importantly are induction-start motors (so they will run on much lower voltages; I had a feeling I could simply control them with a potentiometer with a similar impedance to the coils). 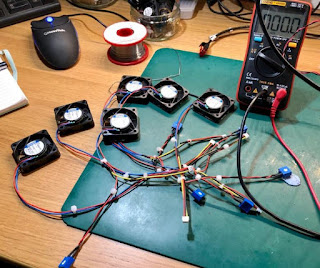 getting them ready to fit in the same JST 1.5mm pitch headers as the stock fans, 10K pots 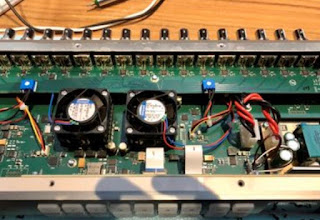 fitted to replace the stock fans - I had to ream-out the screw holes in the fans for the screws to fit, double-sided tape for the pots.


The other issue is the tiny holes they have in those cases for airflow. With a bit of extruded aluminium and grill material you can get a good look. 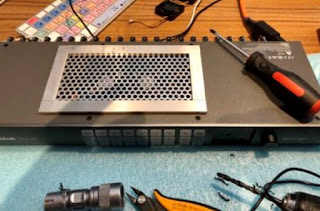 Make sure you don't put another piece of equipment directly above it!


So, proof of the pudding and all that; I ran the stock unit for a couple of hours, pulled the lid off and took a photo with my thermal camera and then did exactly the same after the modifications. The results speak for themselves; the client has these in their audio suite and game me four more to modify. 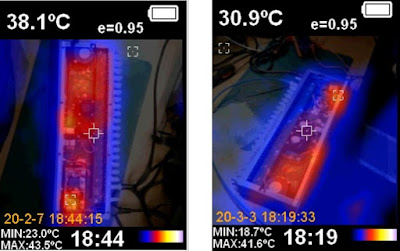 before & after - running cooler and maybe 20dBs quieter


As an aside I found driving these fans at a constant 8v produced the best results.
Posted by Phil Crawley at 17:25