The watch for the electronic geek. All the features of a watch combined with an oscilloscope and a waveform generator. I've signed up to fund the Kickstarter project which has reached it's goal - happy days! 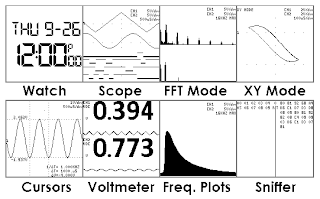 I'm signed up as an International Beta Tester. The Beta Testers will receive a prototype as early as December, and a production unit with all accessories in May. Beta Testers will be expected to be involved with the design and report bugs along the way. Apparently this prototype will initially not work, but will start to work as firmware is developed. The prototype hardware may need changes so you might need to do some soldering. The case will be 3D printed with the current prototype design. Come May 2014 the production units will be available and so I intend to do some video blogging as soon as I receive the prototype and keep with it all the way through to the final version.

Posted by Phil Crawley at 14:33 No comments: