Phil & Tim Taylor go over some of the features of the DD-WRT router firmware and how they can be used to secure a home network.


Find it on iTunes, vanilla RSS, YouTube or the show notes website.
Posted by Phil Crawley at 10:35 No comments:

If, like me, you're tech support for family and friends you often have a need to take remote control of a relative's machine over the internet. There are lots of ways; the easiest being the paid-for services like GoToMyPC, TeamViewer etc which all offer NAT traversal with very  little effort required at each end to make them work. You just give the person you're helping a ticket number and a URL and before you know it (and normally by Java or some other active web content) you're controlling their screen. They have VOIP as well and it's very slick. However, I don't do enough remote support to justify keeping an account going at ten dollars a month and I quite like VNC/RDP etc.
The problem with those protocols is that you need to know the public IP address of the recipient's router and this changes by the vagaries of their ISP and DHCP etc.
So, here's my method for always knowing the public facing IP address of your Mum's computer without having to run anything clever at her end or anything as elaborate as a VPN.

The first part requires you to know their router - it's not hard, you'll just need to look around in its web interface. Here's how I do the second part;

I stick these four files in a convenient directory - typically c:\tools\ but anywhere will do.
wget.exe is an open-source Windows implementation of the common Linux/OS-X tool that fetches text fields from a web server.
GetIP.bat is a Windows batch file that sticks the output of wget into a text file and appends some extra stuff (IPConfig, date and time) and then initiates an FTP session with any web space you may have under your control. Finally index.html is the generated text file (makes the final URL easy to remember).

Stick a shortcut to GetIP.bat in the startup folder (and for extra finesse have it run minimised so nobody sees it) and every time the machine boots you get uploaded to the webserver a very useful status page;

So long as you have a VNC or RDP server running at the remote end you're now only a moment away from being a tech support super-hero!

I've just finished building the technical infrastructure for a big media company who are moving premises. The job has gone rather well and I've been trying to crystallize my thoughts as to how it's differed from jobs that haven't been so enjoyable. From my point of view it all breaks down into three areas - the client, the contractors and time.


In the end you have to guide the customer to understand the golden triangle of all technical projects;


You can only ever have two of these!

Posted by Phil Crawley at 18:02 No comments:

The Oscilliscope Watch - an update

I'm looking forward to getting the beta hardware of the Oscilloscope Watch which I've funded on Kickstarter. Here is a recent project update from the developer.

Sorry for the delay, I've been pretty busy these last few weeks. Here is my monthly report. 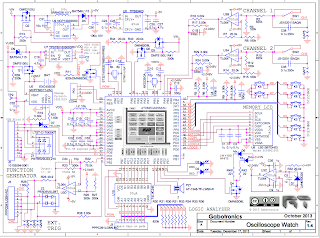 I have done some minor changes to the schematics:
PCB

I had a hard time making space to add the mounting holes while still keeping current packages of the components. I only changed the LEDs from 0805 to 0603. Now there are two nice mounting holes on opposite corners, which will be great for fixing the PCB to the enclosure. I also moved the slide switches towards the center to solve a problem with the enclosure as discussed on update #4. 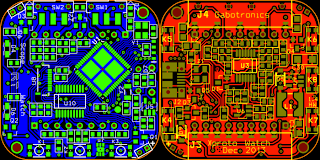 I originally thought of assembling the Beta units myself, this was when I thought I would have only 10 Beta testers. Now with 28 Beta tester units, and a few spares, it makes more sense to have these assembled at the factory. I am ordering the assemblies and they should be ready in about 6 weeks.
BATTERY
I am going with a 380mAh battery, it measures 40mm x 30mm x 4mm, the dimensions of the watch are not changing. I have already received enough samples of these for the Beta tester units. The battery life should not change much from the initial estimates. 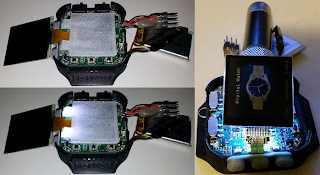 So I started to research what I needed. I contacted Sharp and they referred me to a company that does "front lights". I have just began talks with them, we are signing NDAs.
The Beta units will still have the backlight diffuser, but this is to make everything fit together, rather than functionality.

Not many changes to the enclosure. I tweaked the sliders to fix the collision problem, I moved the charging LED location to right above the USB connector, and made the LED see-thru holes circular. I also added the screw bosses on the TOP part.
SOURCE CODE

I haven't done much to the code, only some minor tweaks to reduce current consumption during the watch mode. Once I get the Beta units, I will set up a repository, initially for Beta Testers. I am looking forward to working with the Beta Testers!

A lot of work to still to be done, but it sure is fun!

Posted by Phil Crawley at 18:26 No comments:

At ten gigabits ethernet over copper cable really struggles. Everything has to be just right and even well terminated twisted pair cable is on the hairy-edge.

On the job that I've just finished had a lot of fibre and copper data and the time to test (on a per circuit basis) is much higher for copper than fibre. With OM3 fibres so long as you have an acceptable sub-3dBs of attenuation at 850nM ten gigs is a doddle. We had to re-terminate maybe half a dozen circuits and using our INNO core-alignment splicer it takes no time. On the other hand getting the copper data cables right is a mission with Near-end cross-talk, alien cross-talk and return loss all having the be measured across four pairs. The output (above) is from our Fluke DTX-1800 analyser.

As an aside, one of the freelancers I use a lot showed me a brilliant trick with fibre panels); the BT standard for core-order involves having the coloured and striped cores 12 couplers away from each other in a 24-port panel. The better way is to put the coloured and striped cores next to each other in the same duplex pair so that if you make a mistake it's easily rectified at test-time. 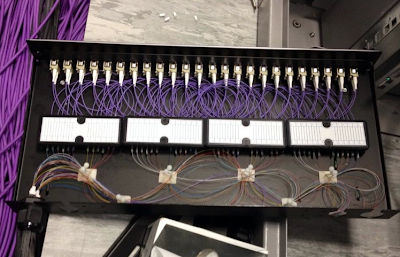 Posted by Phil Crawley at 18:58 No comments:

A week is a long time in Blackmagic firmware! 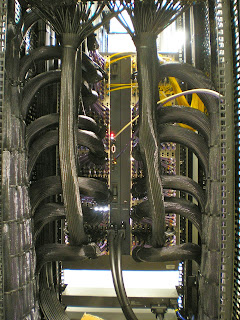 I recently installed a 288x288 Universal VideoHub from Blackmagic - bear in mind this thing has 576 coaxial video connection and 288 RS422 ports it takes more than a day for a wireman to do a nice job of plugging it up.


here's one we did earlier!


Also bear in mind this is a modular system with space for 72 interface cards - each one has four HD/SDi ins and outs (up to 3G 1080 50/60P fact fans!) as well as a proprietary connector with four RS422 standard machine remotes.

So - once unboxed I filled up the chassis with cards, control modules and power supply cards and bolted it into the cabinet. However - the power supply units were delayed and so I got Tony the wireman to finish dressing it in before I powered it up; what a mistake! 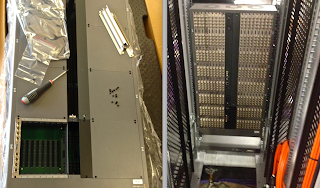 I eventually got around to firing it up expecting to start programming it the same day but imagine my horror when I discovered 20 of the 72 modules were not showing up in the GUI. Swapping cards around showed that I did indeed seems to have twenty duff interface cards; pretty poor quality control I thought. BM UK's tech support department gave me the impression they didn't believe me and after lots more swapping of cards they agreed to take them back.
I called them the following day only for them to tell me they couldn't find any faults with the cards we'd returned! I asked them to go over their testing methodology and the engineer started with "...I upgraded the firmware on the cards and inserted them into our test chassis"; exactly how I'd started - well, long story short, in the three days between me starting and them getting the cards to test BM had issued a new version of firmware. They'd gone from 5.0.4 to 5.0.5 without giving any indication to UK support as to what the changes were. It turns out that 5.0.4 disables some revisions of the card! How many of that version of the cards did I have? Twenty. 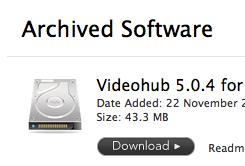 So for whatever reason Blip.tv have shut down the account that Hugh and I were using to host the RSS feed and media for the video podcast we do. Without any warning they shut off making any changes to the account (like re-directing the RSS feed and I hadn't been sensible enough to run it via FeebBurner) or even putting up a "so long and thanks for all the fish" clip up to let our iTunes & other podcast watchers know that the feed was dieing. Apparently we're a bit dry; they don't want engineering/educational screencasts, rather stuff that's more 'off the wall'. Ho hum - it was free (and free is never good) and so we've stretched to paying for hosting.

From now on all Engineer's Bench goodness will be at it's own domain;


What is worth noting is that only a minority of our watchers do so via iTunes/RSS - most folks now get it via Youtube, and so that has been unaffected and can still be found at the same old place.

We've been a bit slow recently but it's just the pressure of work. We have several planned:


So hopefully 2014 will produce a return to form for your favorite broadcast engineering related video podcast!
Posted by Phil Crawley at 12:36 No comments: