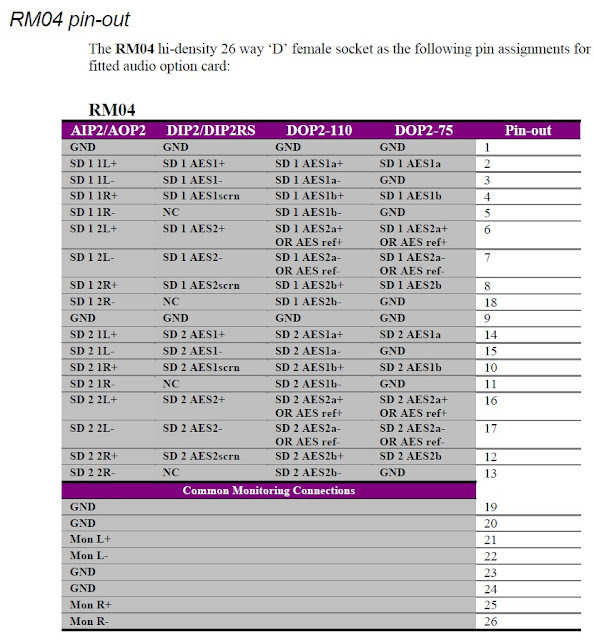 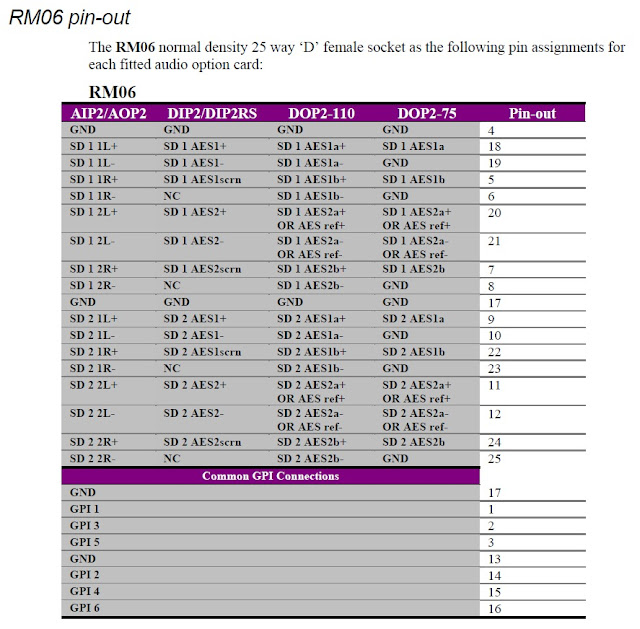 Posted by Phil Crawley at 14:02 No comments:

It was 1962 that the first draft of the RS232 standard for serial communications was published.
I used to have a good side-line in making null-modem RS232 cables for my colleague who were often confused by why you even need a cross-over cable. The thing to remember about RS232C is that it was only ever intended as a means of connecting dumb terminals (think VT100) to modems.
The EIA RS232C (1969) standard defines two types of equipment:
Only one style of connector is defined - the 25-pin D-type (no 9-pins or RJ45s!) and the sex of the connector reflects DTE or DCE (male for DTE, female for DCE) - that's it; everything else is a departure from the standard. So, the original intention was:

or, put another way:

And that's it - it wasn't intended for management ports on disk arrays or ethernet switches, just modem/computer connectivity. Once you've grasped that fact you get an understanding of what some of the pins (used to be!) used for and why you need null-modem adapters/cables sometimes.

So it's probably worth looking at the pinouts for RS232, 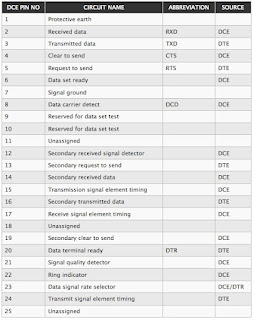 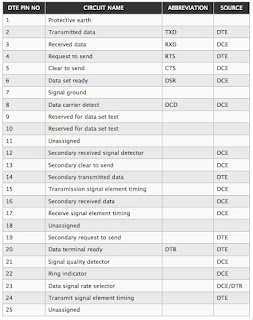 There's an awful lot in there! All the signalling lines that allow the modem to tell the terminal that it's picked up the 'phone line and detected a carrier or is getting a ring signal (RI - ring indicator) are all largely historic now, but have to still be paid attention to in some circumstances. What the standard assumes is a 25-core cable, all pins wired pin-pin with a female end at the DTE (to connect to the terminal's male connector) and a male end at the DCE. Notice that the transmit pin on the DTE end connects to the receive pin on the DCE end (Tx - Rx) and vice versa. The same is true of all the handshaking pins (RTS; request to send - CTS; clear to send).
So, if you need to connect a DTE to a DTE (PC to PC or PC to anything else that regards itself as a DTE - has a male connector) you need a cable that does the cross-over for you, a null-modem cable.
At this point it's worth talking about handshaking; if you have a modem talking over a slow line (and in the 1960s that would have been 110 baud; some people can type faster than that!) you need a mechanism of first ensuring the link is up (DSR; Data Set Ready and DTR; Data Terminal Ready) and then the flow of data is controlled (RTS; Ready to Send, CTS; Clear to Send). BUT, spin forward thirty years and you're using RS232 for PC-PC or other management functionality and the flow control needs to be either 'spoofed' by the cross-over cable OR it's probably being done by the software using one of several RS232 flow-control protocols. The most common if these is XON/XOFF and uses two special character to pause and resume transmission;

If you look in your Windows device manager for a port's settings you can see; 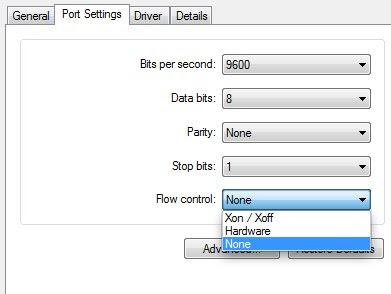 So with all this in mind here are the pinouts for a null-modem cable; in fact there are two you can make - a three-wire (use a piece of FST - useful if all you've got is an audio tieline!) or a six-wire (which takes the hardware handshaking pins through) - send it down a cat5 line! In the case of the three-wire the handshaking lines are looped back on their equivalents at each end so that hardware flow control never stops the link. 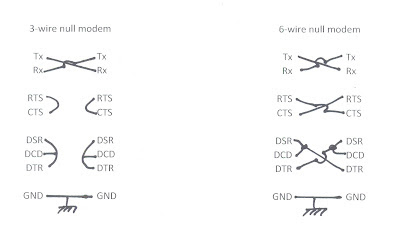 So the final thing is probably to give the pinouts for a 9-pin -> 9-pin (which would by definition be female to female) null modem cable for RS232C DTE-DTE cable; 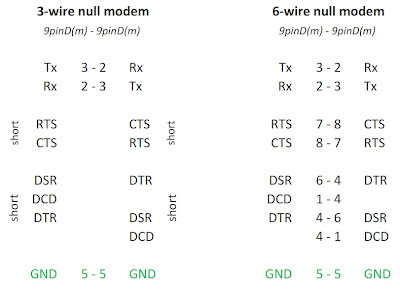 Posted by Phil Crawley at 12:54 No comments:

In the same way that the Red One seemed to break the mold of digital cinematography three years ago the interesting development at the moment is the Blackmagic camera shown at NAB this year. It has a 2.5k sensor and supposedly 13-stops of range (that's 78dBs if you're a video person!). Anyhow - I look forward to hearing from anyone who has used it in a non-Blackmagic funded film!
So - here is an article (admittedly from BM) that has some sample footage; 12-bit RAW DNG files (they are logarithmic - that's how you capture 13-stops of dynamic range in only 12-bits!). I downloaded a sequence and had a crack at grading a frame to what I thought looked nice (colourist friends may well disagree!); 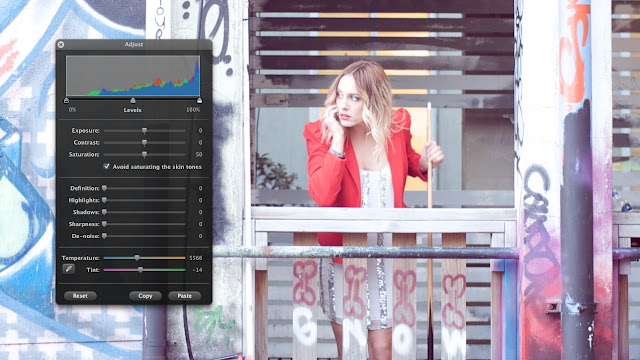 What I think looks nice; 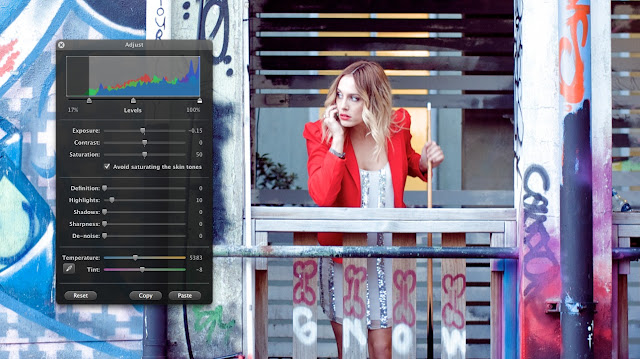 and some detail to see how much resolution is there; 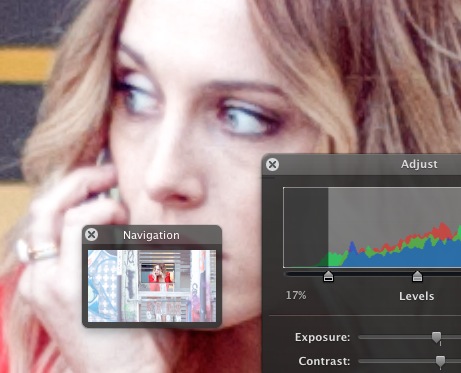 When building a custom XMON cable what guidelines should be followed? Here are the general specifications for the XMON cable. Note that 24m is the maximum recommended cable run. Beyond this distance some signal degradation may be noticeable (especially talkback and headphone quality).

I always resort to using the pre-made Avid cable as I have NEVER got this to work as a homebrew!

Posted by Phil Crawley at 15:38 No comments:

Imre Lakatos and a definition of pseudoscience

I did several philosophy of science courses on my degree and although everybody knows about Sir Karl Popper and Thomas Kuhn less people know about Lakatos; He had a lot to say about pseudoscience - things that look a bit like science (to gain respectability for their ideas?) but fundamentally differ from real scientific theories.

According to the demarcation criterion of pseudoscience originally proposed by Lakatos, a theory is pseudoscientific if it fails to make any novel predictions of previously unknown phenomena, in contrast with scientific theories, which predict novel fact(s).  Progressive scientific theories are those which have their novel facts confirmed and degenerate scientific theories are those whose predictions of novel facts are refuted. Lakatos's own key examples of pseudoscience were Ptolemaic astronomy, Immanuel Velikovsky's planetary cosmogony, Freudian psychoanalysis, 20th century Soviet Marxism, Lysenko's biology, Niels Bohr's Quantum Mechanics post-1924, astrology, psychiatry, sociology, neoclassical economics, and Darwin's theory.

There is a very good article on the LSE's website including a recording from the early seventies where he explains the difference between science and pseudoscience.
Posted by Phil Crawley at 22:11 No comments: 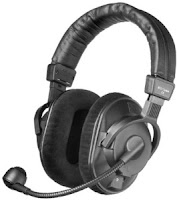 I'm just prep'ing a few Beyerdynamic DT250 headsets for a customer - football club we work with a lot! Their commentary guys love these headsets and the quality/comfort is hard to beat for either pitch-side or commentary booth use. They come with a proprietary connector and being German it's all beautifully manufactured.
This customer sometimes uses these with portable Glensound ISDN codecs (reporter-type mobile packs) and sometimes with Yamaha audio mixers and so they need both the 5-pin XLR option and the 3-pin XLR/1/4" stereo jack cable. Since removing the rigged cable requires a screwdriver and is fiddly I normally ship these with the 5-pin cable and make up a breakout;

Alternatively you can order the two different cable options, if you can get your colleagues in Sales to pay attention! 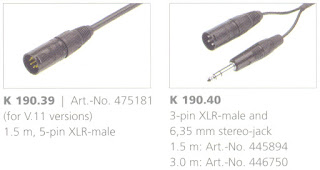 Posted by Phil Crawley at 16:54 No comments: