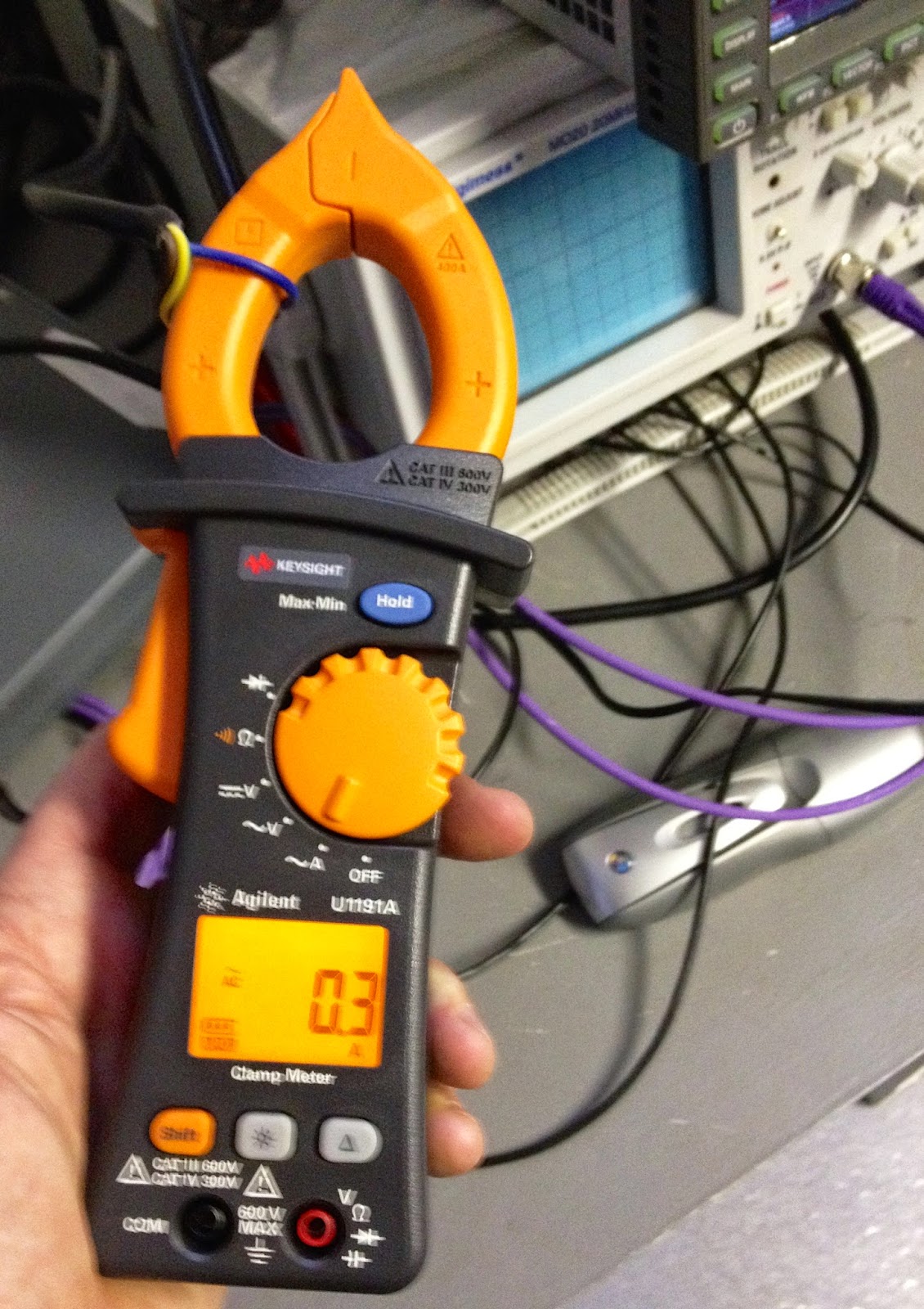 Clamp meters have moved on somewhat since I last had to buy one (a Fluke; sometime in the late nineties). This one is a pretty competent DVM as well as being able to sample and hold min, max and average values across all setting. For most days it could definitely do double duty against my Amprobe 37XR multimeter - EXCEPT the Agilent doesn't have non-contact voltage detection (the Amprobe does!). Anyhow - how do you get four and a half digits of resolution across multiple ranges on a brand-name test set for less than a hundred quid? Engineers today, don't know they're born...!

Today I was called to a customer's site where they have three canal-barges, each with two or three edit rooms on board. In the bilges of each boat there is room for little half-height equipment cabinet where they have the shared-storage chassis, network switches etc. They've been suffering an unusual number of equipment failures (motherboards dieing etc) and since they also seem to have RCDs tripping out as a regular feature my first thought was earth leakage.
Here is a picture of the electrical termination point for each boat - two 32A feeders go into the hull, one for the pumps and one for the mains distribution board. The cables are permanently suspended in the water (and have been for many years!) and the ones I inspected had clearly been submerged for so long there has been lots of water ingress into the rubber jacket of the cables. One felt almost ready to crumble in my hands. 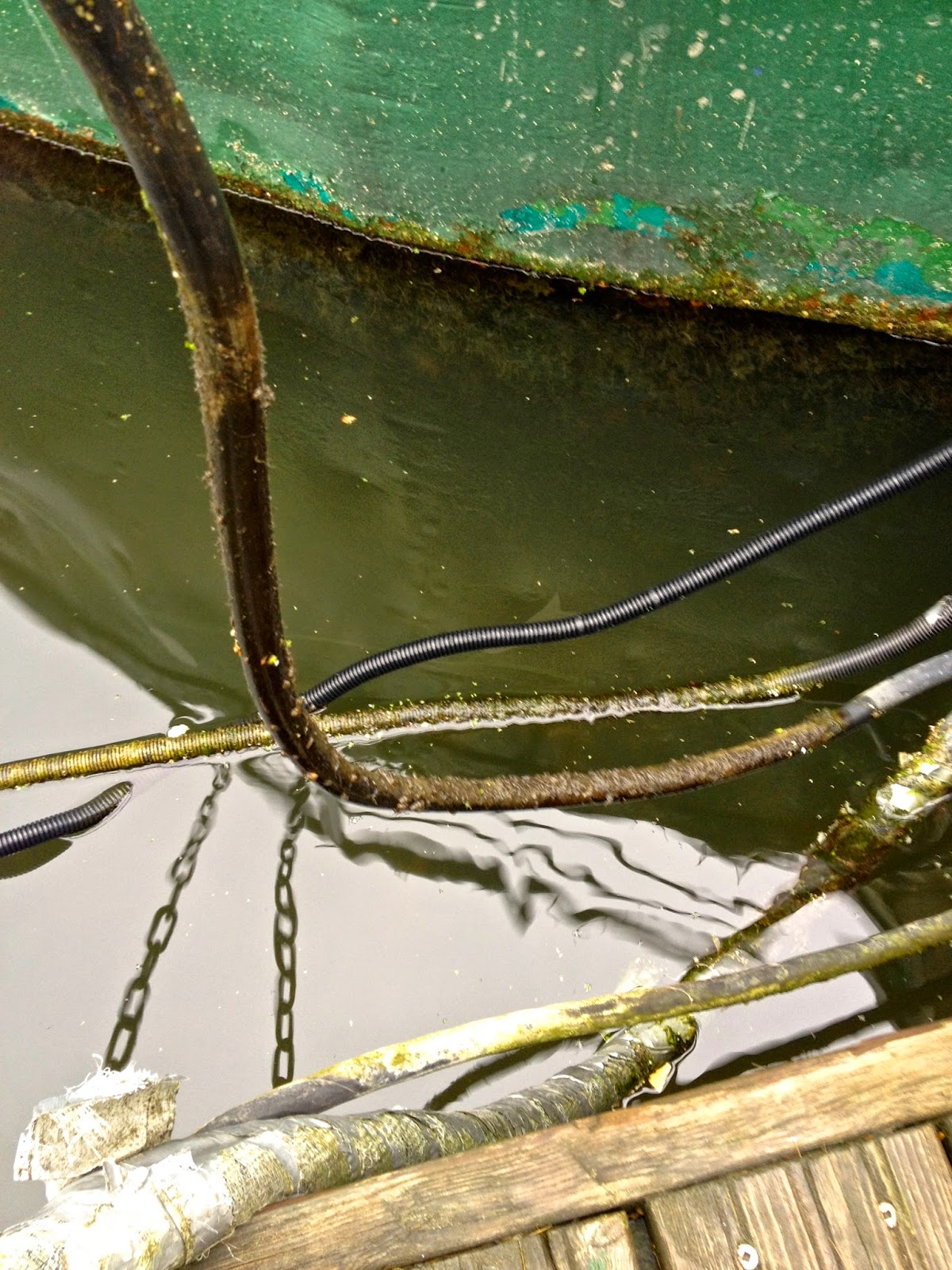 Insulation has both electrical resistance and capacitance – and it conducts current through both paths. Given the high resistance of insulation, very little current should actually leak. But -- if the insulation is old or damaged, the resistance is lower and substantial current may flow. Additionally, longer conductors have a higher capacitance, causing more leakage current. Attaching the clamp meter to the incoming earth bond (pre-the consumer unit) measured a massive 100mA of leakage current. This not only risks the equipment being fed off this supply - there is an imbalance between the live and neutral cores and Class-1 equipment is often upset by this, and power supplies can pass this residual current to the earth-plane on PCBs.

So - my advice was; replace those 32A feeders with marine-grade power cable as soon as possible.
Posted by Phil Crawley at 17:08 No comments:

Compression is a fact of life, there have only been two production VTRs that stored uncompressed video - D1 and D5; they are no longer used because they were both SD (and D1 was only eight-bit video). So, the vast majority of the material we handle is compressed and so there should be a way of quantitatively judging it. There three methods of numerically analysing how good pictures are, but for the most part and engineer or editor proclaiming "...those pictures look a bit soft" is what still passes for picture quality analysis!

Don't regard this blog-post as definitive (which of my rambling are?!), but this comes from a discussion with a couple of industry colleagues earlier in the week about the quality of satellite contribution circuits. They'd got into a bit of a to-and-fro with the carrier over bit-rates and chroma-sampling structures ("but 4:1:1 isn't as good as 4:2:0 for the same data rate" etc.) which for my money entirely misses the point. You have to assess the picture quality of a compressed link (satellite, IP, etc.) not on encoder settings but on perceived picture quality. A few thoughts;
The three methods used for determining video quality are;
So, PSNR - to steal from Wikipedia;


...the ratio between the maximum possible power of a signal and the power of corrupting noise that affects the fidelity of its representation. Because many signals have a very wide dynamic range, PSNR is usually expressed in terms of the logarithmic decibel scale.

PSNR is calculated as a rolling set of differences between source material and the compressed version and is most easily defined via the mean squared error (MSE). Given a noise-free m×n monochrome image I and its noisy approximation K, MSE is defined as: 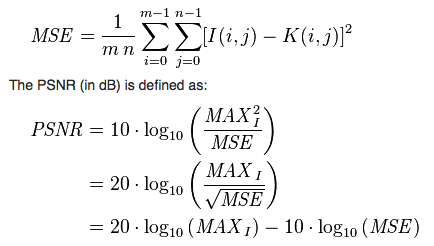 The point is that it can be calculated from the pixels. No observer bias is involved.
Engineers love quick rules of thumb, and PSNR for video images are no different; 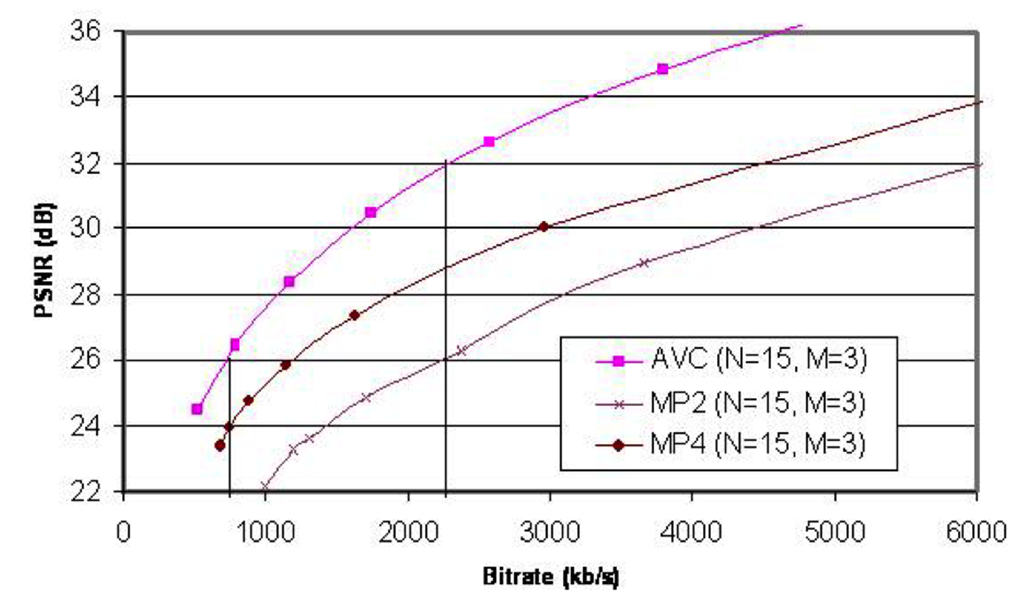 So, to return to my point 1 (above) - here is a graph showing data rates against codec types for the same SD pictures. Venerable old MPEG2 (from the mid-90s!) up against vanilla MPEG4 (late nineties) and AVC (AKA H.264 / MPEG4.pt10 - early noughties). A full 6dBs of quality (twice as good in layman's terms?) lie between those two codecs at 2.2Mbit/sec (all other things being equal - use of a Stat Mux etc). You could even dive in further to MPEG2 and see the difference between the implementations from twenty years ago and what folks like Main Concepts are doing in 2014). The decoders particularly are now much better at hiding macro-block edges and recovering from corrupt frames. 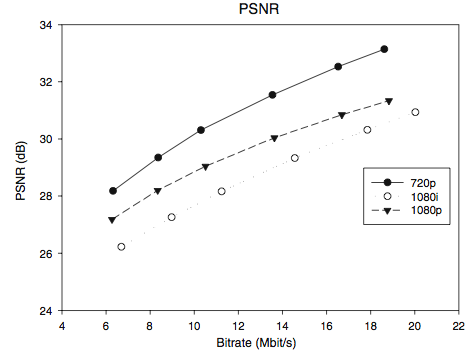 Point 2 (above) seems obvious, but only when comparing 1080i with 1080p pictures AT THE SAME FRAMERATE; so perhaps best to say 1080i vs 1080PsF; Interlaced pictures will always be a challenge as pixels (and hence macro-blocks) move within a frame, unlike progressive pictures. BUT, you still get better motion rendition withing interlaced frames for the same framerate. Eventually we'll have moved to 1080 50/60P and so it'll be a moot point.
This graph shows data rate for HD pictures, we expect over-the-air HD to be at ten megabits in the UK.

So, how to make these assessments if you're worried about a contribution circuit or transmission path that you're responsible for? If you work in coding and mux then you probably already have tools to assess. PSNR is such an important part of delivery specs/SLAs in broadcast (you need to keep the accountants at bay after all!) that you'll have a Tektronix PQA600 or a Rohde & Schwarz DVMS-series test set. 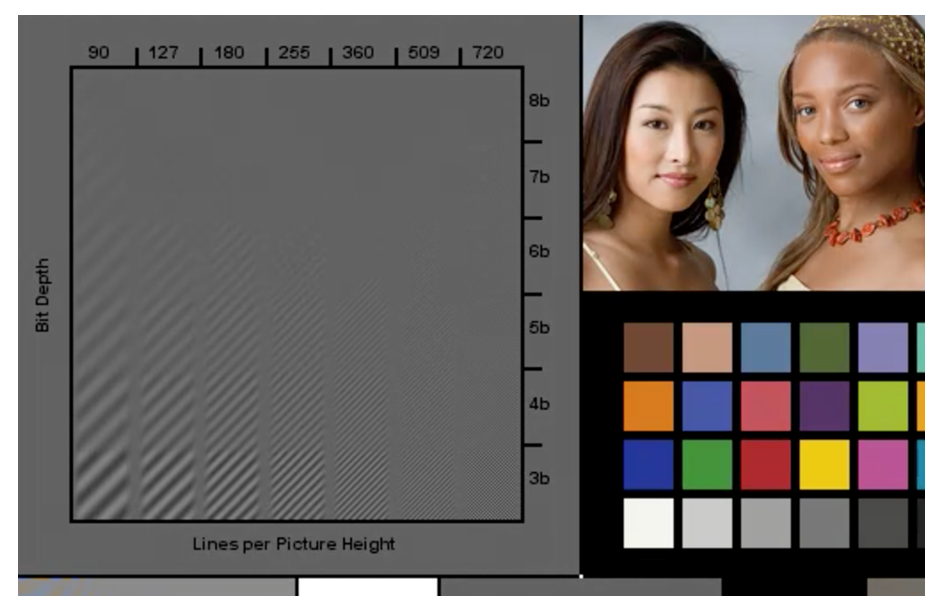 However, "traditional" video quality measurement needs access to the compressed signal and the original which may not be possible; particularly in the case of my pals who are at loggerheads with their satellite provider. What you need is a test signal that you can feed over the connection and then make an assessment from the picture content as to how badly the pictures are being degraded. I've banged on about the SRI Visualiser before but it has a compression multiburst that shows you lines-of-TV-resolution against perceived bit-depth. You can then relate the two worst-case lines/bit-depth figures to the table of PSNR values.

Forgive the voice-over!
Posted by Phil Crawley at 12:10 1 comment:


Sony is to stop selling its range of ½-inch tape machines and camcorders in just over a year’s time. The manufacturer has targeted March 2016 as the date by which it will cease sales and distribution of its professional VTRs and camcorders, owing to what it described as “the global trend of migration towards file-based operation”. 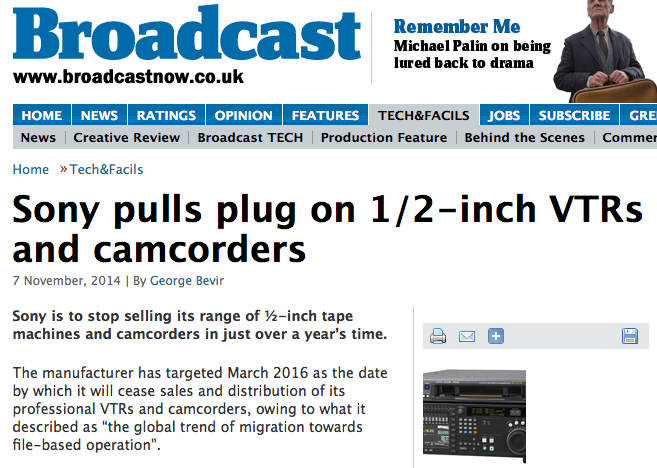 VTs have been a constant feature of my 26 years in broadcast engineering - I spent three years in VT maintenance when I was in BBC TV News and all through my time in facilities in the nineties/early noughties and my last dozen years working for a reseller the most dense way of storing data (which is what video has been for twenty years) is on magnetic tape using a rotating head-drum. 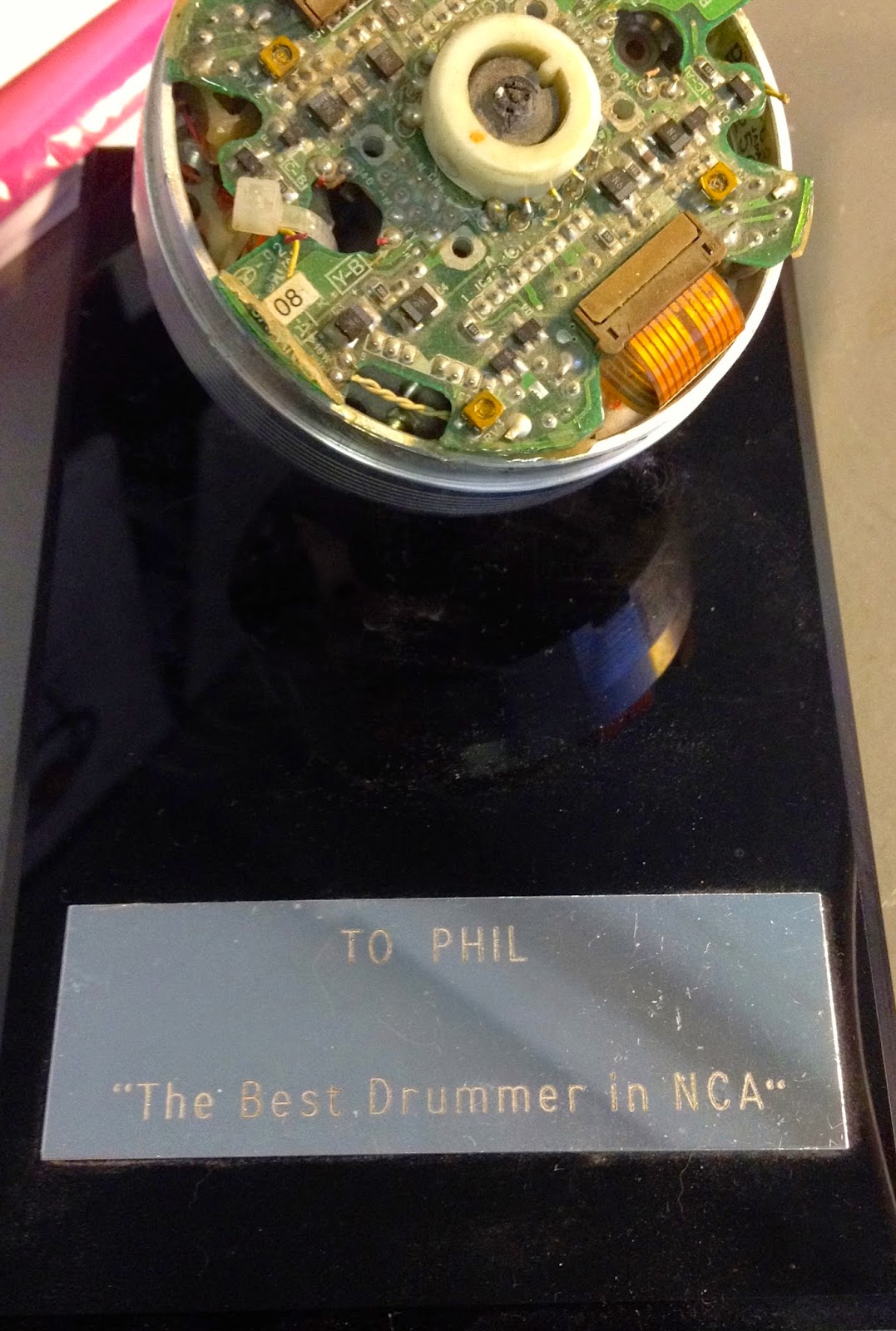 VTRs are mechanical and hence unreliable; you can't pull rust-on-sellotape (a crude description of videotape) over a rotating metal drum without things wearing out and when I started I estimate that at least a half of all broadcast engineering hours were spent fixing decks. I certainly enjoyed that mix of electronics and mechanics and when I left BBC TV news my supervisor in VT maintenance had this made for me - at the time he reckoned I had done more than a hundred head-drums.

So, here are a few memories about VT formats I have had to deal with. It was all analogue when I started with the D1 format just starting to make inroads. By the mid-90s DigitalBetacam had become the predominant format for most production and post-production and Sony continued their domination of tape formats with HDCam and HDCamSR in the late nineties/early noughties. Since then it's been disk-based (XDCam) and flash-based (SxS, P2 etc etc.) - I haven't done anything more than cleaning a tape path or head-drum in the last decade but I used to be a pretty good VT-fixer!

Posted by Phil Crawley at 17:40 No comments: