The most interesting things I saw at IBC last week were not software updates or new 4k workflow tools (save us from "workflow tools"!) but some developments from our good friends at Barnfind.
Their current CWDM products top-out at 18-wavelengths on a single fibre, and if you need to pack more signals (synchronous broadcast; HD/SDi, MADI, AES etc OR asynchronous data; ethernet, fibre-channel etc) onto a fibre then DWDM is the answer - with a big price tag! 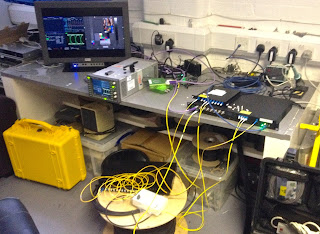 Whilst on the subject of Barnfind I have a 1350nm SFP which when in a demo chassis caused an intermittent yet repeatable fault; routing 1.5G video (1920x1080 @4:2:2) through it would cause CRC errors in only the AES packets; the signal was then sent to a BT facility line and the first MPEG-encoder it hit at the tower showed the fault by both video and audio disturbance every few seconds; I assume that is down to how that model of encoder extracted timing information. Swapping the SFP out for a new one (exactly the same model) drove the fault away but putting the existing one back re-introduced the trouble.
I am flummoxed how a format converter can reach into the SDi stream and corrupt the AES CRCs - it doesn't seem possible and so I was eager to get it back to the workshop to test it and get a bit more info. So - I have replicated the configuration as much as is possible - even down to the 1000m fibre drum we keep to hand (it's 250m of four core with the ends spliced-back on each other).
However - the thing has been on 24-7 since last week with my trusty Tek WFM7120 monitoring it waiting for any errors to show and there has been nothing! Do I trust this SFP now? I suppose if I keep it in the demo kit it will be a good test. 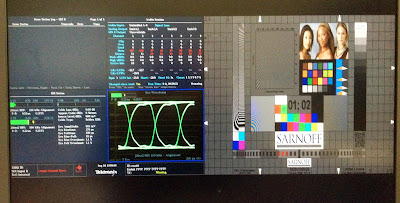 Posted by Phil Crawley at 11:34 No comments:

"Physics is the only real science; The rest are just stamp collecting..."

You may know this quote by Ernest Rutherford and although biologists and chemists would maybe argue, all scientific people, when they get down to it, know exactly what he meant. We just happen to have given a different name to the physics of living things or the physics of chemical reactions. It's where pseudo-science (Marxism, homeopathy, NLP, Intelligent Design, horoscopes, etc etc etc.) will always show their true colours by not subscribing to the empirical method and falsifiability.

I can recall my first occasion of being aware of physics; aged seven my Dad and I had just watched "The Dam Busters" on TV and decided to build a model of the Möhne Dam out of Mechano. The final touch was two motor-driven gun-turrets powered off a 4.5v bike-lamp battery. Initially the two small motors span too fast to be convincing but my Dad showed me how rather than having two wires going to each motor we could take just one from the +ve terminal of the battery, connect the -ve terminal to the metalwork and earth the 2nd terminal of the two motors. Now, aside from providing an illustration of how car electrics work the two turrets also span a bit slower and my Dad explained that it was down to the resistance through the joins in the strips of Mechano. I understood voltage and (maybe) current at the time, but resistance to current was new and I realised that there were things going on that I didn't yet understand but I needed to!

Spin forward ten years and I was just starting a degree in physics, the very first lecture I attended had a great illustration of how poor our instinct is for all this stuff. The lecturer put up a graph with size on the X-axis (ranging from the diameter of a hydrogen nucleus to the width of the observable universe - suffice to say it was a logarithmic scale!) and velocity on the Y-axis (stationary all the way up to C - 3 x 108 ms-1, the speed of light - the fastest anything can go; God's speed-limit if you will). He then drew on a box which represented most people's experience;
When you look at that box on the whole graph you realise how poor our experience is against the whole of creation and how you should perhaps trust the numbers rather than your own intuition.
So, physics is hard from a gut-feeling point of view. I changed degrees at the end of my first year to maths & programming but never lost the love of physics. Here are a few things that have helped me along the way.
So, just to stay with the popular science, I heard a great podcast in the "How to be amazing" series with Brian Greene; if you need a bit of a jump-start with your physics then he's your man!

Posted by Phil Crawley at 09:43 No comments: