It’s exactly the same dual Panasonic IPS (LCD) display module and modulated LED backlight as the current version (and indeed the Sony X310 replacement for the X300) with the following upgrades;
They made some point about having improved the FPGA code in the panel for better sharpness – sounded like marketing waffle; and in truth savvy customers don’t want a monitor “sharpening up” their pictures; pixel-to-pixel is what’s needed; brutal honesty rather than the picture processing you get on a domestic TV.


Emerald KVM system from Black Box; it comes in three product skews;
https://www.blackbox.com/en-us/products/black-box-brand-products/kvm/control-room-kvm/4k-kvm-over-ip-switch
Points to consider;
Niceties;
So in fairness I don’t think there is any scenario (other than owning existing plant) where we could sell it as a better option than Amulet (or a Teradici option).


StreamBox have implemented eCMU functionality in their Chroma range which means they can take the DolbyVision metadata across the IP-SDi feed and decode the rec.709 fold-down data at the far end and display dual-6G outputs on and HDR monitor and a rec.709 display (typ. a decent TV). The powerful thing is that by having the Dolby tone-mapping algorithm with all the lift/gamma/gain tweaks in the HDR stream they can produce a pixel & colour accurate SDR version at the far end with no extra bandwidth required. Super-cool.


We sold a few of the earlier gen Canon DP-V3010 4k displays and although they were good 4k displays their HDR abilities were more limited than the X300 – in fact today they would be an equivalent to a £3.5k Eizo CG319X.
The new monitor uses the same Panasonic panel & backlight as the Eizo and Sony, but in this case it is a single-layer IPS which means the blacks are probably not as good as the CG3145 and the X310. I’d have to test that when we can our hands on one.

We sometimes sell a LightSpace license with Klein colour probes and I tend to then provide a day’s training (doing it next week at a customer's).
We never really offer LightSpace as a product by itself; always as part of a package and as part of the colourimetry training day.

They’ve been selling this for a year as a competitor to the Leader but I don’t know it’s HDR abilities.
Also – all the Hi5-4K+ and associated boxes now support Dolby metadata passthrough so no more hooking up the USB control to force displays to switch between rec.709/PQ/HLG. Nice. 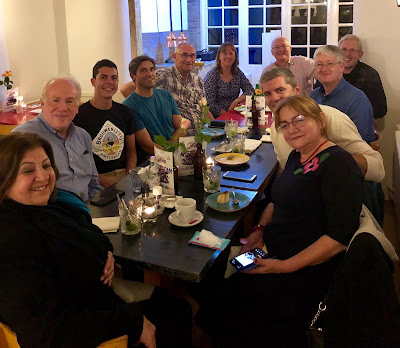 The Bryant Unlimited cable manufacturer's meal - the highlight of my professional year!