I've now done a couple of Sony BVM-X300 (4k/HDR OLED panel) monitors for HDR-TV deliverables to the BBC. The Beeb are behind the Hybrid Log Gamma standard, currently at 1.2 for broadcast. It's benefits over Dolby's 10-bit version of their Vision HDR system (also called DolbyPQ) are many and rather splendidly the DVB as well as most manufacturers are now behind HLG. I'll write further about why a scene-referred system is a better bet for domestic TV than a display-referred one (like DolbyPQ) but I just wanted to get down some notes on monitor calibration for HLG. 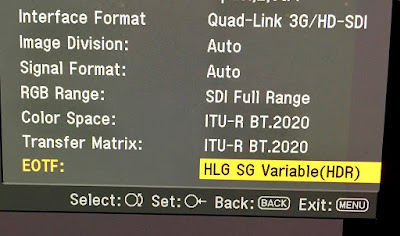 You'll notice the EOTF setting (lit. "Electronic - Optical Transfer Function") is NOT set for HLG 1.2; this available but in the current v. 2.0 firmware it is wrong. Select HLG (Variable), click the know again and dial in 1.2

Next up display a 50% grey field (100% can't be done as the monitor power-limits to stop 1,000Cd/m2 being displayed across a lot of the screen) and point your probe at the display. Remember that unlike DCI-P3 we are still at the 6504K white point of tele. However - at 50% grey we should be seeing low-50's Cd/m2 being emitted from the screen. 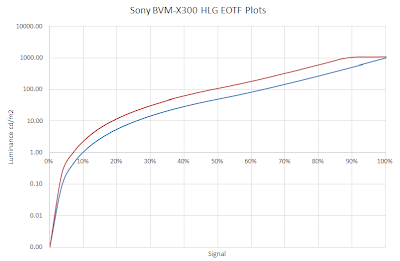 You might have previously heard Sony's "best practise" (sic) advice of setting 50% grey to 100Cd/m2 but this is wrong. Look at the graph; this is the result of profiling an X300 (and they all seem to do it consistently) and notice what happens over the last couple of hundred Candelas at the top end. If you set 50% grey to 100Cd/m2 you get loss of detail in the specular highlights. For the correctly 1.2 HLG curve you need to set 50% to around 50Cd/m2 to 55Cd/m2- remember the Y-axis on this graph is logarithmic.

The one display I had previously followed the Sony advice for was sufficiently out of it's linear range that the dark-greys drifted red minutes after I finished adjusting the monitor and (like all OLEDs) the noise in their blacks is sufficient to make the final tweak to 6504k hard work - the Klein probe was having to average over 32 reads to accommodate the OLED panel. Remember - the K10A is accurate to less than 0.001 Cd/m2 and not the 1.0 Cd/m2 it reads at 10% up the curve of HLG 1.2


So - once you have those under your belt you can PLUGE the display to set blacks correctly for the room (what did I say about scene/display referred?!) and then set about getting the deep greys and the 50% colour balance correct. I've done this now on two X300s with BBC R&D engineers in attendance and they have given this method their blessing!

For a probe I was using a Klein K10A with Klein's own ChromaSurf software. If I get the chance to profile an X300 for myself I will do it with LightSpaceCMS - still the choice of champions for display profiling and LUT-building. They also have an excellent article introducing HDR.

Posted by Phil Crawley at 17:43 No comments: