Colour of the wall and lights in grading rooms

In the last year or so a lot of my time seems to have been taken up with getting monitors and other display devices to show the correct colours for film and TV. However, as with all other areas, context is everything and the colour of the wall behind the monitor (and the colour of the light illuminating the wall) are as important as the calibration of the monitor.

Picture from Robin at Wire Broadcast - Grading Suite at Envy 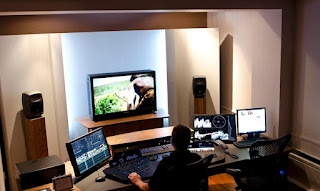 Nobody has perfect colour memory (remind any colourists you know!) and if the rear wall of your grading room is slightly yellow your eyes will adjust to that and you'll tend to grade pictures as if yellow is white and in truth your pictures will be missing blue. So - what's the standard? ISO 3664:2009 specifies "N8" as the neutral grey for accurate colour environments. Essentially you want a paint that favours no reflected colours. You can spend big bucks buying the approved paint from eCinema or RPimaging but you'll wind up spending many hundreds of pounds for a few cans of paint and it isn't really necessary.  I've had splendid results with Crown Plain Grey 5574 Matt Emulsion. In fact ColorTechnics specify that paint for use with their VeriVide D65 “Artificial Daylight” CIE daytime illuminants fluorescent tubes.

Having said that I've never bought the approved tubes, preferring to go to the electrical wholesaler and pick up normal shop-type ones. It turns out that the pet-store industry favours D6500 colour tubes as the light output stretches down into the UV end of the spectrum (sub 300nm wavelength) which animals respond well to. One thing that I have been told is that there is small variance between batches and so it's best to overbuy so that once you've got the holders and baffles fitted you should visually (or using a photometer) make sure the colours are matched. It takes only around 100k of difference for you to be able to spot it immediately and so it's not surprising the manufacturing tolerances are not good enough for TV.

So - wall painted, florescent tubes fitted; what next - well, since you're looking for around 15-20% of the light output of the monitor as a surround (so around 20Cd/m2 from the wall) you need a way to control the brightness of the tubes. You could dim them but there is always the risk of the switching waveform breaking through onto your audio system AND tubes change colour as they are dim'ed (particularly as they age) and so the best thing is to fit mechanical baffles to them; Bryant do some excellent ones - but throw away the tubes as the ones supplied at 6000k colour temperature; a tad too red for grading suites. 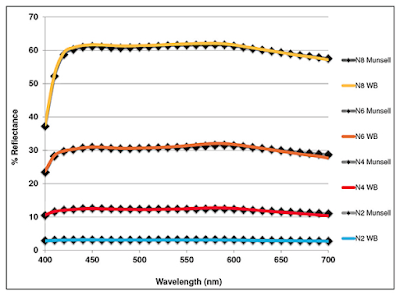 There are a few other things people obsess about when setting up grading rooms;
I'd agree with the second point, but the first one seems unnecessarily picky.

Of course, the biggest offense to anyone who cares about colour fidelity in the film and TV world are these things, Philips Ambilight TVs! 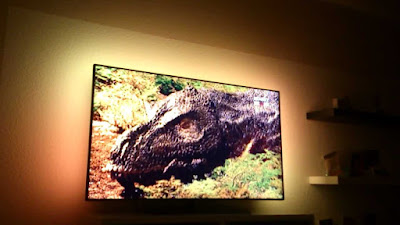 Posted by Phil Crawley at 13:33 No comments: