Because they're semiconductors (and pretty tiny ones at that!) the pixels on modern HD monitors can become "stuck" such that you get a dot that is either black or white (in the case of all three sub-pixels; R, G, and B being stuck on or off) OR a primary (or secondary) colour where less than three of the sub-pixels have stuck. It usuall looks something like this; 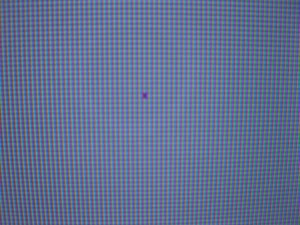 see how the blemish aligns perfectly with the pixel raster

You have to get your face about an inch away from the screen to see a single stuck pixel on a 1920x1080 25" display, not exactly edit/grading viewing distance!
A piece of software that has helped me in the past is JScreenFix which is a little Java app that allows you to hook up your laptop to the monitor - thankfully all current model broadcast displays have HDMI but you might have to make arrangements (DVI to SDi converter, for example).

Here's the interface as I used it today to mark three dead pixels on a broadcast OLED; 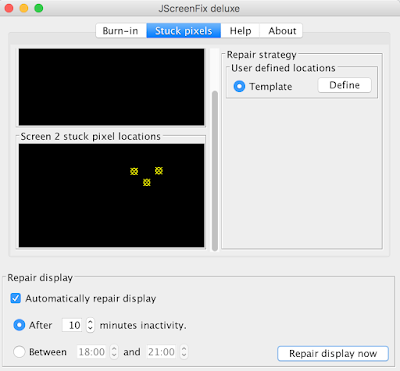 This is the random pattern (video noise) that it fires at the hundred or so pixels around the area of interest. The idea is that you leave it running for a while and hopefully it will provoke the thin-film-transistor (in the case of an LCD) and the diode (in the case of an OLED) to recover it's ability to start switching again. 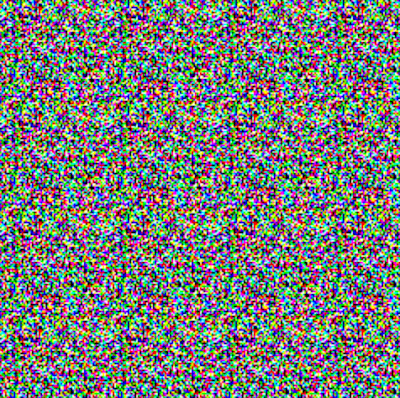 In the case of the monitor I had a go at today I was able to clear down two of the three stuck pixels, but the final one that remained resistant to repair was interesting; a photo shows it to be probably some contaminant in the panel rather than dead pixels or sub-pixels; 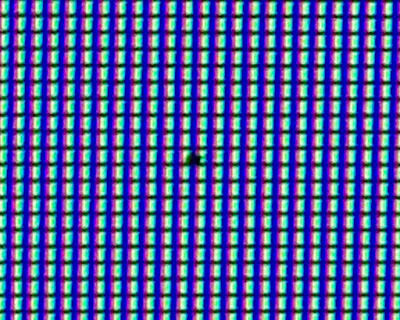 the blemish seems to be in the inter-pixel space?
Posted by Phil Crawley at 17:56