The venerable old Rec.709 colour space was first proposed in 1990 for HD Television and we still work to it today and the assumption is that pro/broadcast monitors will faithfully translate the Y, Cr, Cb data that comes down a video cable to the R, G, B pixels on the display surface.

For a Sony BVM-series monitor merely doing the following will ensure correct 709 operation; 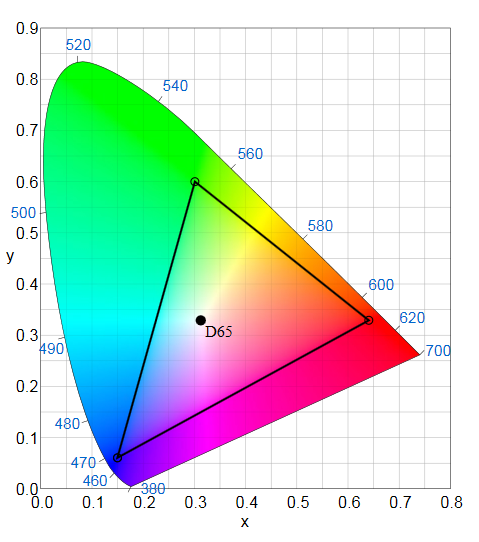 However - along with the £18k BVM monitor at the front of the grading suite you also expect a high-end domestic TV for the producer and director to look at and of course they don't want to see any differences! So; here are a couple of monitors we profiled today; 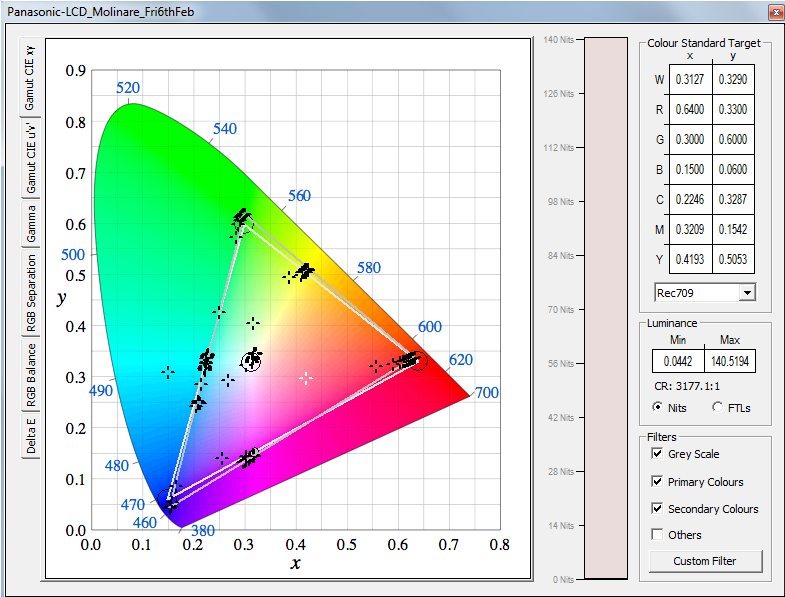 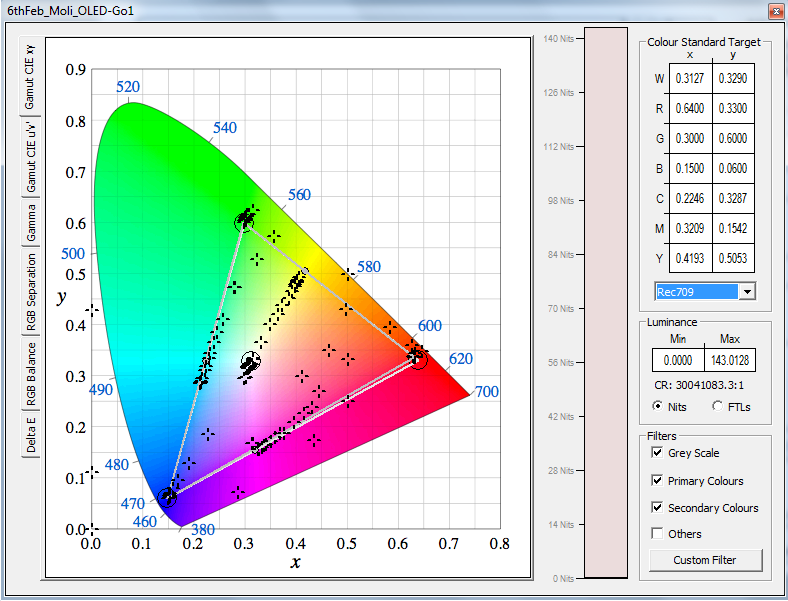 I used the following to profile these two televisions;
Looking at the results would suggest that both displays are almost bang on; in fairness I did try and get them as close as possible using their built in colour-tweaks. The other things to pay attention to is to disable all the dynamic modes; TVs increasingly try and tweak themselves based on picture content or even ambient light and although those things may be great for watching a movie it's hopeless for TV post-production usage.
It's not just the overall gamut that affects the look of pictures, you have to pay attention to the gamma of the profiles. This is not the same as the 2.2 / 2.4 gamma used between cameras and monitors, rather the relationship between low and high levels for the RGB channels and ideally it should be linear. 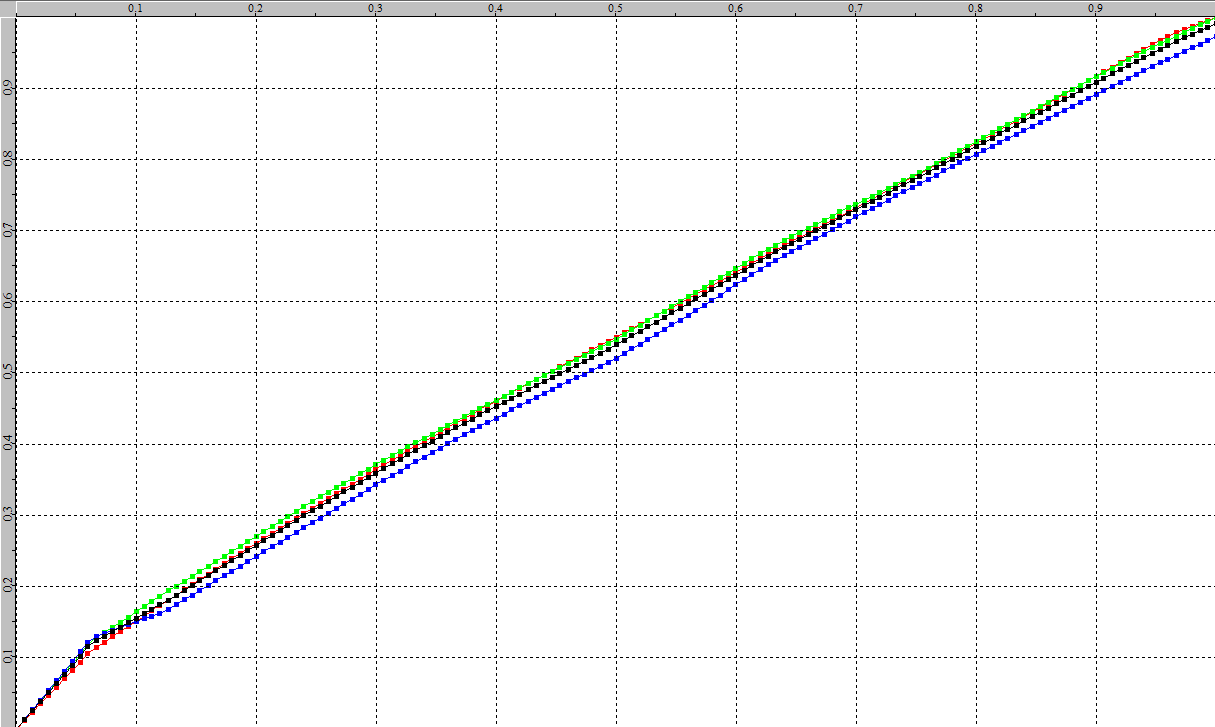 LG OLED - although it seems more linear overall it has a strange separation in the blacks. 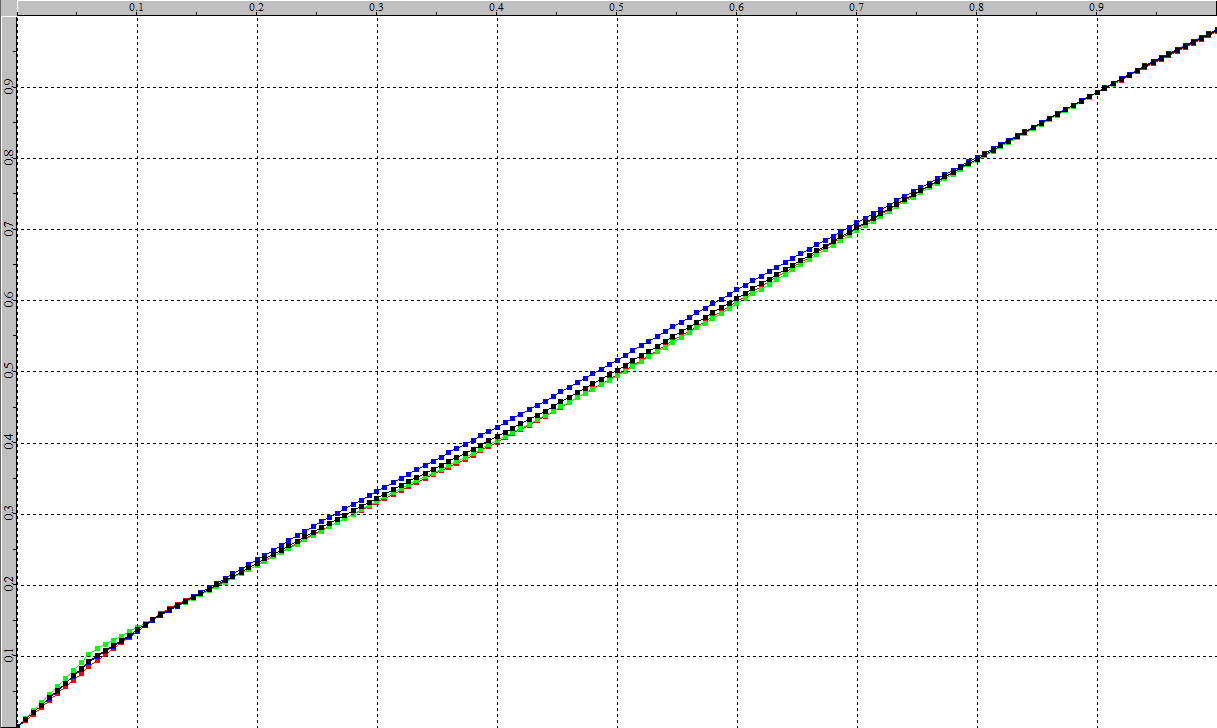 Panasonic colour gammas - not ideal!  Funny non-linearity in the blacks and poor colour tracking in the mid-tones.

So, once the displays are profiled (it takes around an hour and a half to read the 4900 points that make up a 17-point LUT) you can examine the resulting "cubes" that can be downloaded into the LUT (the Fuji in our case) to make the TV look as close to Rec.709 as possible. 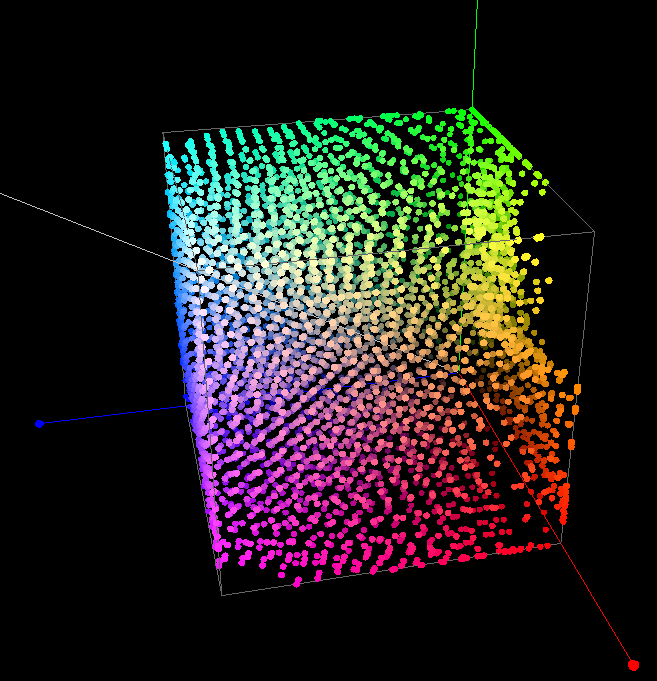 The LG-OLED cube shows that the monitor is capable of displaying almost the entire colour-space but there is a bit of a lump missing from the yellow and the magenta ends. This doesn't mean that those colours aren't available, only that the LUT is having to do the work in transposing the colours in those parts of the gamut with the attendant loss of dynamic range.
Interstingly; that was the first thing the colourist noticed on real pictures "...the magenta in the blacks looks a bit off". 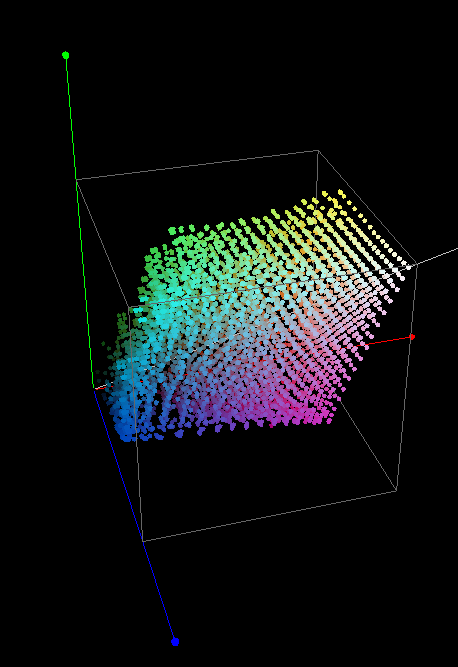 The Panasonic's derived monitor LUT shows a different story; clearly the dynamic range of an LCD is much more modest than the OLED. 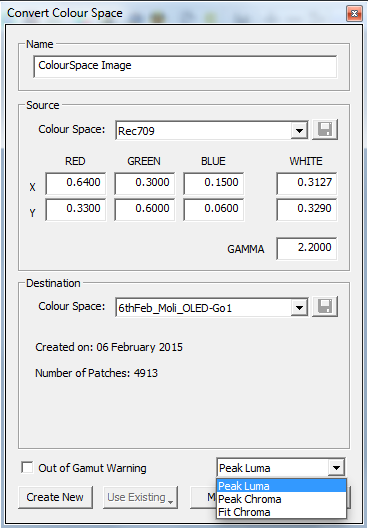 To turn the profiles into LUTs you have to use the "convert colour space" in LightSpace. Selection of Peak Luma, or the alternative Peak Chroma, defines the parameters the LUT is generated with - Peak Luma maintains the peak Luminance of white, while Peak Chroma will drop the Luminance if required to prevent colour channel clipping, if the peak Y value of a colour channel is greater than that of whites.

Once converted you can export the LUT in a variety of formats for use in other manufacturer's converters. One nice touch is that if you "select all" LightSpace will write out a folder of LUTs in every format it supports; takes around a minute and means you can hand a USB stick to the customer without any worry of incompatability. 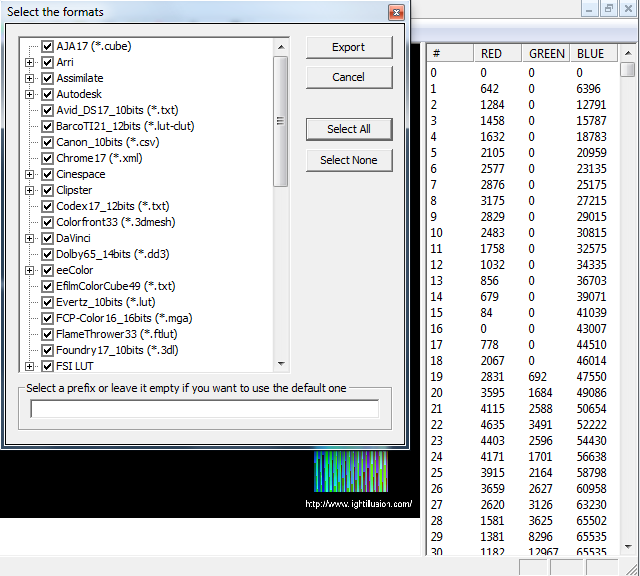 So - once loaded into the Fuji both TVs were now a darn sight closer to the look of the Sony BVM monitors. The problem is that you're in a dimly lit room with the golden eyes of a highly-paid colourist and it's remarkably difficult to get them to be happy if there are ANY discernible differences. The one chap I was talking to today did finish the conversation with "...still, if you could get a £2k TV to look exactly like an £18k monitor we would never buy £18k monitors!"

Once final point - the client had bought an AJA LUT to use - loading the derived LUT into the AJA looked no different from the Fuji from a colour point of view but it did show banding in the Cr channel - like it is only an 8-bit LUT; I need to chase the further.
Posted by Phil Crawley at 18:13