What a terribly lax blogger I've been over the last few months; part of that was due to a couple fo trips to Saudi to finish building a facility in Riyadh (more about that to come; did you know that protective mains earths are not mandated there?!).
Anyway - I look after a couple of podcasts (just spoken word content) and for the longest time I've been using the Conversations Network Levelator to compress the dynamic range of each clip before I import them into Audacity and then edit/normalise them before exporting as an MP3 for upload. Imagine my horror when after switching to a new (old) laptop that I installed Mojave (OS-X 10.14) onto I could no longer use The Levelator; and it's a thing - lots of folks complaining online about it, but it's abandoware so what are you going to do? 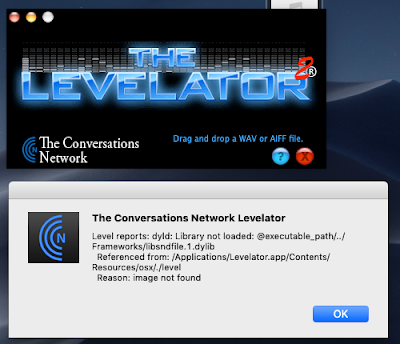 You upgrade the OS and some software stops working...!

People listen to podcast in noisy environments; in cars, on the bus in earbuds and in other non-ideal listening environments. So, like talk radio the best thing is to compress the signal until there is almost no dynamic range and then normalise it to less than a dB under 0dBfs. Then it's a loud and punchy as it possibly could be and it'll be usable in bad listening situations. The Levelator was brilliant at doing this, but I thought I should at least roll my sleeves up and see how good the compressor in Audacity is, and blow me down it isn't bad! 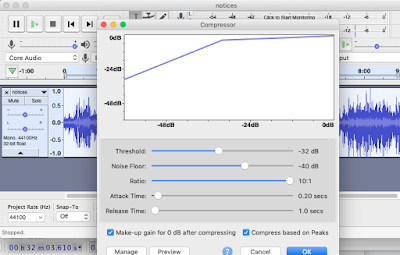 After a bit of tinkering around with the ratio and threshold I arrived at these values as being best for audio that is peaking around -10dBfs (I'm a broadcast engineer, after all!) - it produces speech that still sounds OK, but has almost no dynamic range!

In this clip the band starts at around 2'15"

Sticking this .WAV file through the compressor set up (above) produced a very usable result which I then normalised before joining it to the rest of the segments of the podcast.

It looks like there is a lot of noise, but it's the sound of a very large room and on the speakers is sounds OK.